Homes with wood stoves often rely on these appliances to heat all or at least a portion of the living area. In order to maintain a comfortable house in the thick of winter, wood stoves often experience nearly constant use. While this provides a steady source of heat, the heavy use of an outdated wood stove can cause more harm than it may be worth. Luckily, research and innovation has allowed the design and release of modern EPA stoves that foster a much healthier living space. 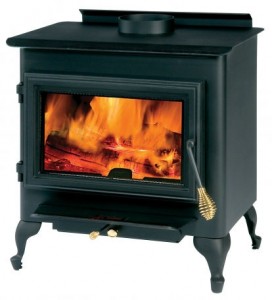 The first major benefit of modern EPA stoves is the improved safety. Incompletely burned wood produces creosote, which builds up along the interior of the chimney. This black and tarry material can sometimes build up to the point of restricting air flow through the chimney, turning the house into a smoky mess. In addition, creosote is highly flammable, so a single stray ember could ignite a devastating chimney fire. The design of the older, less efficient stoves cause wood to burn poorly, depositing significantly more creosote with each fire. On the other hand, the modern EPA stoves are built to burn the wood more completely, resulting in far less creosote buildup. While the chimneys of the old stoves may require several sweeps throughout the year, removing the relatively minor creosote buildup from a modern stove chimney could function safely with the minimum of one required sweep per year.

The more efficient burning of wood not only reduces creosote buildup but also improves fuel efficiency. In fact, the modern EPA stoves use up to one-third less wood than older stoves to create the same amount of heat. This impressive improvement in fuel efficiency can save a homeowner hundreds of dollars every year in fuel. Compared to older stoves, the modern EPA stoves can have up to 50 percent better efficiency, which translates to a lot of savings.

Finally, these ultra efficient wood stoves create healthier air. As mentioned, wood that burns inefficiently and incompletely produces more creosote and other chemical by-products. When the smoke carries these particles through the living space, they become lodged in the lungs upon inhalation. Loaded with potential carcinogens, inhaling this smoke can lead to cancer – not to mention causing immediate problems like bronchitis and irritated asthma. However, the modern EPA stoves significantly cut down on these harsh chemicals in the air, even reducing them by 70 percent in some cases.

Modern EPA stoves have a distinct edge over outdated wood stoves. Improved safety, fuel efficiency, and air quality make the upgrade to a modern EPA stove an obvious choice. For more information on choosing and having a new stove installed, contact the experts at Tri County Hearth and Patio Center.